You are here: Home / News / Pocan pushes for voter protection 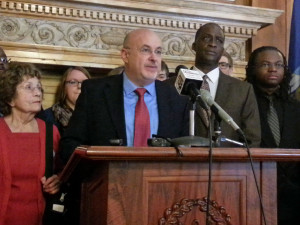 While the U.S. Constitution does include provisions that prevent discrimination at the polls, U.S. Representative Mark Pocan (D-WI) says there’s nothing in the founding document that protects the fundamental right to vote for everyone. Without that language, the Wisconsin Congressman says courts have upheld voter identification laws, burdensome registration requirements, and reductions in early voting opportunities enacted across the country.

The Madison Democrat is introducing a Constitutional Amendment that would guarantee every U.S. citizen of legal voting age has the right to cast a ballot on Election Day. Pocan says the change would stop states from passing laws that restrict voting, unless they can prove they will not hinder the right to vote for legal citizens.

An amendment to the Constitution will require two-thirds of the Senate and U.S. House of Representatives to approve the measure, along with ratification by three-fourths of the states. Pocan admits it’s a difficult road, but he argues state Legislatures can no longer be allowed to enact laws that restrict voting rights for partisan gain. He says it’s time to “reaffirm our founding principle that our country is at its strongest when everyone participates.”