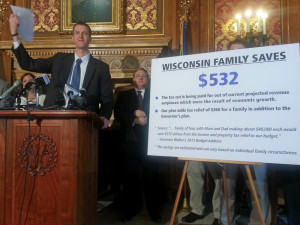 Democrats were quick to voice opposition to the proposal, with state Representative Jon Richards (D-Milwaukee) pointing out that the state’s wealthiest residents will benefit the most. The plan would tax anyone making between $14,000 and $319,000 a year at the same rate, which would be set at 5.94 percent in 2015. Kooyenga contends it’s “nearly impossible” to push through a tax reform plan that doesn’t benefit high-income earners, since they account for over 50 percent of the tax revenue collected by the state.

Richards also argued that the budget surplus being used to justify the larger cut came about as a result of “historic cuts” made to education under the last state budget. The Milwaukee Democrat, who sits on the Legislature’s Joint Finance Committee, says the money would benefit far more Wisconsin residents if it were used to increase per pupil spending in public schools.

While the Legislature’s budget committee has yet to take up Walker’s tax cut proposal, action on the provision is expected to come by early next month. It remains unclear if Kooyenga’s plan will be added to the bill though. While Republican leaders have indicated they are open to increasing the amount of income tax relief included in the budget, no top GOP leaders in the Legislature endorsed the proposal.