You are here: Home / Legislature / Spending cut and tuition freeze for UW

There were plenty of recriminations Thursday night, as the legislature’s Joint Finance Committee voted on a budget amendment for the University of Wisconsin System. The budget panel’s vote came nearly a month to the day since UW System President Kevin Reilly was called before the same committee, to explain a $648 million dollar surplus, accumulated mostly through tuition increases.

Committee members voted 14-2, with Democratic Senators Jennifer Schilling and Bob Wirch joining majority Republicans on passage, to impose a $2.5 million cut on the UW System, instead of the $181 million dollar increase Governor Scott Walker had proposed. There’s also a two-year tuition freeze, and a loss of promised autonomy and flexibility.

Senator Luther Olson, a Berlin Republican, suggested UW System officials may not have deliberately tried to hide the surplus. “I almost think you didn’t know it, which means you’re incompetent,” said Olson. “When you’re pleading poverty, and your fund balance is increasing year after year, and you don’t have decent enough accounting to give fiscal reports. If you guys were the CEO and the board of regents of any company, the stockholder’s would fire you all.”

Committee co-chair, Senator Alberta Darling, said blame for the failure to be forthcoming on the existence of the surplus needs to be laid at the feet of Reilly. “It’s totally unacceptable, and Kevin Reilly should not be in this position,” she said. “We don’t have the power or authority to make that decision, but in the best interest of the state, Kevin Reilly should not be the head of the university system, with this breach of trust.”

“The buck’s got to stop somewhere,” agreed co-chair, Representative John Nygren. “While we don’t have that authority, I challenge the UW Regents to actually start asking the tough questions. Engage in the process. Students out here, the taxpayers back home, employees of the university system, all deserve better. Maybe it’s not Kevin Reilly, I don’t know. But there needs to be some answers to these questions, and over the last few months since we’ve learned about these issues, we haven’t gotten many.”

“We understand the concerns about UW’s cash balances, but we need to consider the long-term implications, and the hole we will face two years from now when revenues will not be there to support our core operations,” said Brent Smith, President of the UW System Board of Regents, in a statement released following the vote. 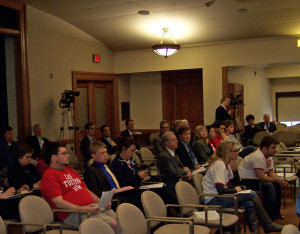 A motion offered by Racine Democrat, Representative Cory Mason, would have provided $40 million in additional grant money for UW students. Mason argued that was fair, given the fact that so much of the surplus originated in tuition increases. “Over $600 million in surplus identified by Fiscal Bureau that was available, $459 million of it based on student tuition and UW Extension fees, and not a single dollar to increase student aid and grants, to address tuition,” said Mason. “Not a nickel to make the UW System more affordable and accessible.” Mason was joined by Milwaukee Democrat, Representative Jon Richards, in voting against the Republican-authored amendment.

In other action Thursday night, the Joint Finance Committee voted to keep controversial rent-to-own provisions out of the budget. Under the recommendation from Governor Walker, rent-to-own businesses would no longer have had to disclose their Annual Percentage Rates, or comply with a number of current transparency requirements. The motion to delete the language from the budget passed on a 10-6 vote.

Committee members approved in large part the governor’s proposal for law enforcement agencies to collect DNA. They voted 13-3 in support of a motion requiring DNA collection from people arrested for felonies and convicted of misdemeanors. Samples would not be collected from those merely arrested for misdemeanors, and circuit courts would be required to notify defendants of their right to seek removal of their DNA profile from the state’s databank.

Earlier in the evening, committee members voted, unanimously and without discussion, to cut funding for major transportation projects by $59.5 million, in order to close a shortfall in the state roads fund. That action is likely to delay major freeway reconstruction projects in the Milwaukee metro area.