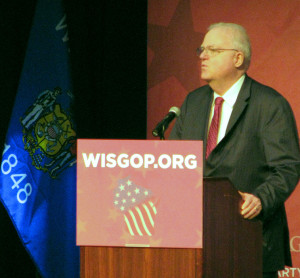 Congressman Jim Sensenbrenner speaks at the GOP convention in Wausau

Even members of the same political party can’t agree on how to fix immigration policies.

U.S. Representative Jim Sensenbrenner is opposed to President Barack Obama’s immigration bill, calling it amnesty that he cannot support. The Republican from Menomonee Falls wants to secure the borders and enforce laws that prohibit employers from hiring illegal workers.

According to Sensenbrenner, the so-called Gang of Eight bill makes the immigration problem even worse. He says it would take 25 years to become a citizen for those going through the ropes legally and 13 years for those living here illegally.

“That is a 12-year head start to get citizenship for breaking the law and it is wrong, it is dead wrong, and it sends a message that we should not send around the world.”

U.S. Representative Paul Ryan says there’s agreement on the principle that the system is broken and needs to be fixed.

The Republican from Janesville disagrees with his friend Jim Sensenbrenner, saying the Senate bill and the legislation being drafted in the House are not amnesty.

“The driving principle of immigration reform that’s working its way through Congress is number one: first secure the border. Number two: make sure you have a verification system at the employer level so an undocumented immigrant can’t get a job. And number three: do not reward a person for cutting in line.”

Sensenbrenner says whether supporters “sugarcoat the pill” by calling it comprehensive immigration reform, a pathway to citizenship, or earned legalization, granting amnesty divides the country between “lawbreakers and law followers.” Sensenbrenner says it is “blatantly unfair” to the millions of immigrants who’ve applied for legal status.