You are here: Home / Environment / Conservation / Unusual opener up north 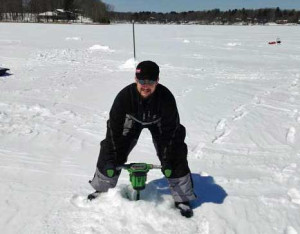 Bring your boat, but bring your ice auger, too. Wisconsin’s fishing opener is Saturday, and anglers will have some challenges. That’s because many of the lakes across northern Wisconsin still have significant ice cover, up to ten inches or more. “The places that do have some open water are flowage-type lakes with a lot of inflowing water, a lot of warm runoff coming in, but even those lakes have some ice on them in many instances,” said Max Wolter, Fisheries Biologist with the Department of Natural Resources in Hayward.

Wolter said that finding a boat ramp with an open water path to where you want to fish will be the big challenge. “Access is just going to be the biggest thing,” he said. “When you find open water, I think the fishing’s going to be just fine. It might even be great.”

For many people, the opener is going to mean more of what they’re been doing all winter. “They’ll be able to ice fish for things like pike and walleye, and they’ll probably do pretty well if they’re able to find safe ice,” said Wolter. “I think the ice fishing’s been good, and it will continue to be pretty good.”

A word of caution though, make sure the ice is safe to venture out on. Wolter said while some people may still be driving on the ice, that’s definitely not recommended.

Wolter said a lot of people have wondered whether fish will spawn under the ice. They won’t. “They’re going to wait, and when the water heats up and the ice goes out, that’s when they’re going to start dropping those eggs,” he said. One thing is clear – once spawning starts, it will happen fast. “Usually we have a nice progression where things like pike, perch, walleye go early. This year, when the ice goes out and the water starts to heat up, things are going to be going very quickly.”

That was borne out in Winnebago County, where the slow-to-arrive spring had lake sturgeon on stall mode for the highly anticipated spawning season. Conservation Warden April Dombrowski activated members of the all-volunteer Sturgeon Guard earlier this week. The big fish took off with a flurry of activity along the Wolf River, and it was pretty much over by Friday. “This has gone down as one of the fastest runs completed in a short period of time,” said Dombrowski, who canceled the Sturgeon Guard’s following the end of the day’s shifts. “On average, the run takes place for approximately seven to 10 days.”

Just what the long-term impacts of the cold spring and delayed spawning will be is tough to say. “Some species are going to respond better to this than others,” said Wolter. “It’s really going to take us a few months until we know exactly how this is all going to shake out.”