You are here: Home / Business / Walker stands by WEDC 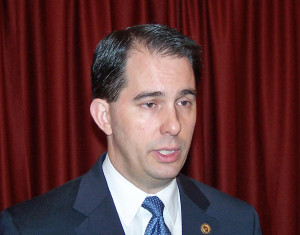 Governor Scott Walker continues to express confidence in the problem plagued Wisconsin Economic Development Corporation. At an emergency meeting of the WEDC board of directors which he called on Wednesday, the governor said overall response has been favorable.

“Repeatedly I hear from regional, local economic development specialists, and from job creators. They like the work that the front line staff at WEDC is doing. They think it’s been very effective, and in many ways much more measurably responsive than they got from the Department of Commerce in the past,” Walker said.

Walker’s comments echoed those made on Tuesday by Assembly Speaker Robin Vos. “I can only speak from my own experience. But that is totally different from opportunities that they had working with the Department of Commerce,” Vos said. “So at least in Racine County, speaking to those people, they feel it’s an improvement.”

The latest problem at WEDC was this week’s resignation of its public information officer after only a month on the job. “It goes back to policies and procedures,” said Walker. “They had a background check. They used a system. It’s just one of those things where in some cases they just can’t buy a break.”

Walker praised Executive Director Reed Hall, and promised a greater role for the WEDC board. On Thursday, there will be a hearing on a state audit, which was highly critical of WEDC.

The legislature’s budget committee was also scheduled on Thursday to vote on a funding increase for the agency. Joint Finance Committee co-chair John Nygren (R-Marinette) says majority Republicans will likely approve the $14 million increase, although the panel could tie that money to the agency being able to demonstrate reforms have been made and that it is more accountable.