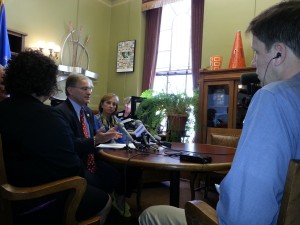 Representative Barca talks to reporters in his office after being briefed on the LFB audit.

Wisconsin’s public-private job creation agency did not have sufficient policies to administer its programs effectively, according to a new state audit. The nonpartisan legislative Fiscal Bureau report shows WEDC awarded some grants, loans, and tax credits to ineligible recipients, for ineligible projects, and for amounts that exceeded specified limits.

WEDC awarded $41.3 million in grants, $20.5 million in loans and provided $110.8 million in tax credits, but according to the audit, the agency had no policies for determining how to handle delinquent loans.

State Representative Peter Barca (D-Kenosha) calls the audit “extremely disturbing.” The Assembly Minority Leader says, “It shows a complete lack of controls that are necessary to properly run an agency, a lack of follow through, a lack of accountability, a lack of following the law.”

The partially privatized organization was created two years ago by the Walker Administration to replace the old state Commerce Department. Citizen Action of Wisconsin Executive Director Robert Kraig warned at that time that it was a bad idea.

“A lot of us warned Governor Walker when he privatized the Department of Commerce and created the WEDC that there wasn’t adequate accountability and transparency. This is even worse than we expected. It’s a nightmare.”

WEDC’s new secretary and CEO Reed Hall responded to the LAB’s audit and reiterated many of the challenges that were previously reported by WEDC to the Board of Directors, disclosed to the public and detailed in the Schenck and FIPCO reports.

Hall says it was during the migration from Commerce to WEDC, that the shortcomings of the inherited financial systems, turnover of management and lack of sufficient staff all contributed to failing to keep current on tracking loans in default and delaying the preparation and formal adoption of new policies for WEDC’s operations and programs.

The department is making progress, Hall says, in addressing the issues brought up in the report released on Wednesday. Many solutions have already been put in place, or are about to be activated. Hall says, “LAB’s audit provides a valuable perspective on the opportunities WEDC has as a new organization to better manage our operations, serve our customers, and provide accountability for taxpayer investments in growing businesses in Wisconsin.”

LFB found that WEDC cardholders did not indicate the purpose for 79 transactions totaling $46,100, or 56.0 percent of the 141 purchasing card transactions that were reviewed as part of the audit. Among the unexplained transactions were six season tickets to UW-Madison football games worth $1,789; long-distance telephone calls at a cost of $208; and $120 for four iTunes gift cards.

Barca is a WEDC board member. He says the intent of the entity, which became fully operational in July 2011, was to have more private sector input and to ensure that Wisconsin would be a leader in job creation — with the goal of creating 250,000 jobs in Governor Walker’s first term. Instead, Barca cites the lack of jobs in Wisconsin.

“Clearly, we’re 44th in the nation. So, by any means by which you would study how successful WEDC has been, you would have to say up until now it has been a complete failure.”

Barca blames the failures on Governor Scott Walker, and he wants another audit in one year even though state law requires biennial audits.  If the problems are not rectified by this time next year, Barca says it would be time to abandon the “failed experiment” and revert to old commerce model.

A spokesperson for the governor’s office says, “This audit dates back to 2011 and largely reflects information that WEDC has known for some time.” Tom Evenson says, “This new agency has taken proactive and positive measures to address its issues, and Governor Walker is confident in the direction of WEDC as an agency that aims to promote job creation and economic growth for Wisconsin.”