You are here: Home / Fires/Accidents/Disasters / Wildfire started by logging operation 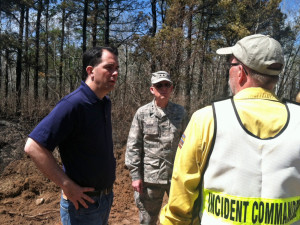 The state Department of Natural Resources says a massive wildfire in northern Wisconsin this week was sparked by a piece of logging equipment.

The DNR says the fire, which burned 8,131 acres of land in Douglas and Bayfield Counties, started at the site of an industrial timber harvesting operation. A worker noticed smoke coming from a cutting head of the machine he was operating and tried to extinguish the fire while another crew member called 911.

The DNR says crews were on the scene in less than ten minutes. The fire spread though, ultimately destroying 47 structures before responders were able to completely contain it on Thursday. Of the structures destroyed, 17 of those were homes.

An investigation has determined there was no negligence involved and the fire was not intentionally set. As a result, the Douglas County district attorney has recommended no criminal charges be filed.

Meanwhile, Governor Scott Walker on Thursday toured the area affected by the wildfire, including an aerial survey by helicopter. Walker praised those who worked to contain the blaze, which included crews from as far away as Canada. The governor also pledged to make sure resources are available for those who lost homes and other property.