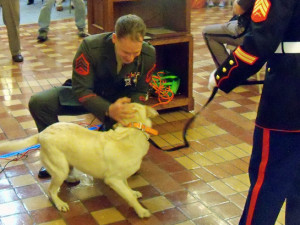 A Marine from Wisconsin who promised to adopt the bomb sniffing dog he served with in Afghanistan received a surprise Friday, during a ceremony at the Iowa State Capitol.

Sergeant Ross Gundlach traveled to Des Moines to appear at a hearing, where the 25-year-old planned to make his case for being allowed to adopt Casey. The four-year-old purebred lab came to the Iowa Fire Marshal’s Office as a bomb detection dog after serving in Afghanistan. Before the hearing, state officials asked Gundlach to attend a ceremony for Armed Forces Day in the Capitol rotunda. It was actually a ruse though, and State Fire Marshal Ray Reynolds soon revealed that they had already taken care of the adoption and Gundlach would be returning home with his dog.

Gundlach was reunited with Casey as the crowd looked on, saying afterwards that it was a total surprise and “pretty overwhelming.”

The Iowa Elks Association donated money for the Fire Marshal’s Office to buy a replacement dog. Casey was promoted to special agent, and then Iowa Governor Terry Branstad immediately issued a proclamation retiring her from duty.

Gundlach is bringing Casey back to Madison where he plans to go to school in June to become a physical therapist.