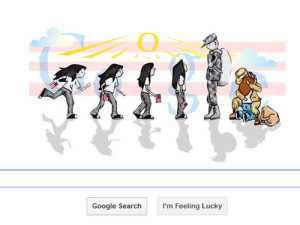 A drawing from a western Wisconsin teenager is featured today as the banner on Google’s home page. Sparta High School senior Sabrina Brady won the web companies “Doodle-for-Google” contest out of more than 130,000 entries.

Brady is an art student and plans to attend the Minneapolis College of Art and Design this fall. She won a $30,000 college scholarship in the contest, a Chrome-book computer, and a $50,000 technology grant for her school.