You are here: Home / News / Wooing voters with love, grace 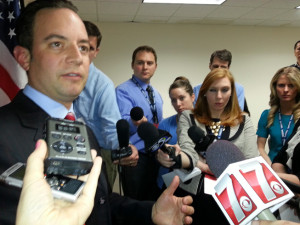 Republican National Committee (RNC) Chair and former head of the Wisconsin Party Reince Priebus says the GOP is making efforts to be more inclusive as they aim to bring more voters into the fold. Though, he says, they won’t be changing their principles.

Priebus says, “It’s not what you say, but how you say it.”

The RNC chair spoke to reporters after addressing the crowd at the Patriot Center in Rothschild for his party’s state convention.

Priebus  says, “It’s a matter of using grace and love and your tone, which is a pretty good rule to live by. I think we all try to do that in our lives. But I think in politics you have to be reminded that, you know, love and grace is part of the conversation.”

The Kenosha, Wisconsin native says the Republican Party could certainly do better with its messaging. Missouri Republican Todd Akin’s controversial “legitimate rape” comment is not helping the cause. “I think we need to train candidates so that they understand how to communicate on some issues, I mean, let’s face it, I mean, the elephant in the room, right? When you say biologically stupid things they have an effect on the entire country and I think that we can take some steps to work on that.”

As the GOP works to broaden its base and attract more women and minorities, the Reverend Joe Medina leads the effort to attract Latinos. Medina is chairman of Wisconsin Assembly of Conservative Hispanics. “Good morning, buenos dias. Yo soy un Republicano.”

Gerald Randall chairs the Republican Party of Wisconsin African American Coalition. “Despite what many of us have heard from the media, we have a lot more in common with the African American community as a whole.”

He says for far too long the narrative for the African American community has been guided by falsehoods from the left. Now they want to change that narrative.