You are here: Home / Health / Medicine / Abortion bill draws protests at the Capitol 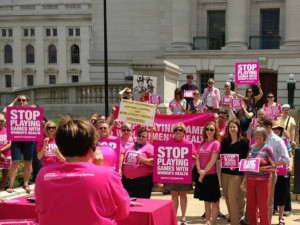 As the state Senate opened debate on a controversial abortion bill Tuesday afternoon, opponents of the proposal rallied on the Capitol steps. Wearing bright pink shirts and chanting “stop playing games with women’s health,” they called on lawmakers to block passage of a bill that requires women to have an ultrasound before an abortion can be performed.

Nicole Safar with Planned Parenthood Advocates of Wisconsin says it’s the latest of several bills introduced this session attacking women’s health. She says Republicans have an “obsessive focus” on not just abortion, but also access to birth control. The Assembly is expected to take up another bill later this week that would stop state health insurance from covering abortions and contraceptives.

Supporters contend the ultrasound bill makes sure women have all the information they need when considering an abortion. Safar says that should be up to doctors and patients to decide though, noting that their clinics already make optional ultrasounds available. She says it’s not the job of politicians to mandate medical procedures for any person.

Safar says another provision in the bill, which requires abortion doctors to have admitting privileges at a hospital within 30 miles, would force Planned Parenthood to close its Appleton clinic. While she admits their doctors could eventually set up that access, the push to pass the bill ten days after it was introduced leaves them with little time to get the process started.

Democrats used a procedural move to prevent final passage of the bill in the Senate Tuesday, although lawmakers were expected to return for a vote on Wednesday. It will then head to the state Assembly.