You are here: Home / News / Assembly teams up to support wrestling 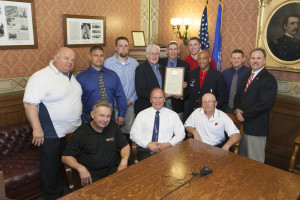 As the Olympics governing body considers whether to get rid of wrestling in the 2020 games, Wisconsin lawmakers unanimously passed a resolution Wednesday in support of keeping the sport in the Olympics. The Assembly also recognized a number of Wisconsin’s wrestling legends who were on hand.

Roughly half of U.S. states have passed such resolutions, actions applauded by 1972 gold medalist Ben Peterson, a native of Barron County. “I’m thinking here what the IOC (International Olympic Committee) would do with that many people and governing bodies saying, ‘hey this is a significant part of every one of these states and communities.”

Although the chances of the IOC retaining wrestling appear to be improving, the sport’s veterans agree the battle isn’t over. “We’re on our back right now; we gotta’ bridge off,” said 1984 silver medalist and former University of Wisconsin Head Coach Andy Rein.

Someone who is no stranger to the intersection of politics and wrestling is Lee Kemp who compared the IOC controversy to his experience as a member of the 1980 Olympic team that did not compete because of President Carter’s boycott of the games.

The 3-time world champion said youth wrestlers who are aspiring to be Olympian is akin to little leaguers dreaming of making it to Major League Baseball. “I can remember seeing Dan Gable win his gold medal in the Olympic Games. Even though I had just started wrestling that gave me a dream…without that I may have never wrestled.”

A River Falls native who has Olympic aspiration agrees with the need for Olympic wrestling heroes. University of Wisconsin Assistant Coach Trevor Branvold said growing up seeing Olympians from Wisconsin was a “huge factor” in his career. He said removal of the sport from the games would have a negative “trickle-down effect” not only at the international level but also down to the youth level.

The resolution was sponsored by Rep. Mike Kuglitsch, a former UW-Whitewater wrestler who, on the Assembly floor, gave a special thanks to his former coach Willie Myer who was also in attendance.