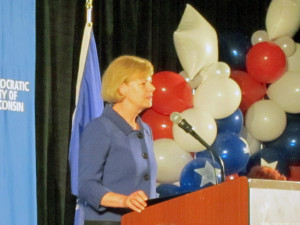 U.S. Senator Tammy Baldwin (D-WI) says Republicans are more interested in fighting the same old battles than moving the country forward. Speaking to delegates at the Democratic Party’s state convention in Oconomowoc over the weekend, Baldwin criticized Republicans’ continued pushes to repeal the Affordable Care Act and to pass a budget she says will put up road blocks to economic recovery. The Wisconsin Democrat says all of those issues were talked about during the elections last fall, where both sides laid out their plans, defended them, and then Americans voted. Baldwin says Democrats won, and Republicans need to “get over it.”

The freshman Senator talked about the struggles facing the middle class and how changes are needed to keep that way of life from disappearing. She says Republicans need to work with Democrats on plans that will help strengthen the economy. She called on delegates to help send a message in 2014 by showing up at the polls and defeating Republican candidates.

Baldwin’s message was reflected by many other top elected officials in the Democratic Party who addressed the convention over the weekend. Congressman Ron Kind (D-WI) accused opponents of the Affordable Care Act of spending $5 to attack the landmark health reforms for every $1 being spent to inform people about the upcoming changes, while Congresswoman Gwen Moore (D-WI) invoked the lyrics of Dionne Warwick, by saying Republicans choose to “walk on by” those who are in need. 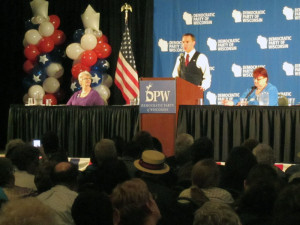 Majority Republicans at the state level were also criticized by many of those speaking at the convention. Governor Scott Walker, the state budget, and proposed election reform legislation were all the subject of attacks. Senate Democratic Leader Chris Larson (D-Milwaukee) referred to the budget, which the Legislature will take up later this month, as just a “huge tax break for wealthy Republican donors.”

Before the convention even got underway Friday, Republican Party of Wisconsin Executive Director Joe Fadness said in a statement that the GOP has been working to clean up a deficit and high unemployment left over from the days of Democratic control. Fadness said that “over the last two years Governor Walker and Republican leaders put things back on track. By balancing the budget, lowering the tax burden facing middle-class families and making it easier for job creators to succeed, we are now moving forward.”