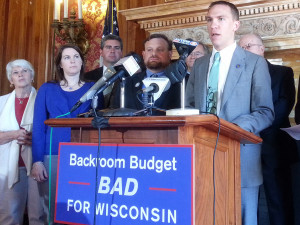 For much of the past week, Republicans have been meeting behind closed doors to hammer out final state budget agreements on school funding, private school vouchers, tax cuts, and the future of BadgerCare. Democrats say they are being shut out of the process though, and lobbyists are being given more control over what ends up in the budget than the taxpayers of the state.

Senate Democratic Leader Chris Larson (D-Milwaukee) says the “people of Wisconsin, who fund this budget, are purposely being kept out of the loop, because Republicans know Wisconsin taxpayers would ever stand for the omnipresent corruption that is finding its way into this budget.”

The Legislature’s Joint Finance Committee meets today and is expected to finalize the budget package lawmakers will vote on later this month. Democrats are calling on Republicans to listen to input from Democrats before advancing the plan. They want the GOP to increase per pupil funding by at least $275, accept federal funds to expand BadgerCare, and make changes to a tax cut they argue favors the wealthy. They also want plans to expand private school vouchers statewide dropped from the budget.

Republican leaders have been largely quiet about what the final provisions that will be added to the budget will look like, although they have indicated that providing tax relief remains a top priority.