You are here: Home / News / Democrats quiet on candidate for governor 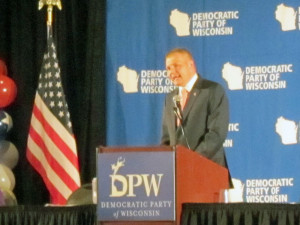 Wisconsin Democrats repeatedly made the argument at their state convention over the weekend that Governor Scott Walker needs to be defeated in 2014. However, there continue to be few hints about exactly who will take on that challenge in the coming months.

Speaking to delegates, Democratic Party of Wisconsin Chairman Mike Tate said it does no good to give Governor Walker a “target to shoot at one day sooner than we have to.” Tate said Walker has a political history of not promoting his ideas on the campaign trail, but by “making himself the least worst option on the ballot.”

Still, Tate reassured the crowd gathered in Oconomowoc that there are several talented and qualified people considering running. Those possible contenders could include Assembly Democratic Leader Peter Barca (D-Kenosha), a vocal critic of Walker, and Professional Fire Fighters of Wisconsin President Mahlon Mitchell, who made an unsuccessful run last year in the recall against Lt. Governor Rebecca Kleefisch. Both say that they are open to a run for governor, but those decisions are still far off in the future.

The list of possible candidates did shrink a little over the weekend. Congressman Ron Kind (D-WI) said he will not take on Walker in 2014. Former U.S. Senator Russ Feingold (D-WI) teased that he had no plans to be a candidate for office in the next two years, but hinted in his convention speech that he might be interested in a rematch against Republican Senator Ron Johnson in 2016.

Any candidate running for the Democratic nomination is expected to face a monumental challenge in going up against Walker. Boosted by his victory in surviving a recall election last summer and his rising prominence on the national stage, the governor is also expected to already have a strong financial advantage heading into the campaign.