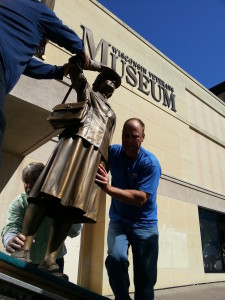 Familiar bronze figures leave the Wisconsin Veterans Museum, after having been on display for 20 years. (PHOTO: Jackie Johnson)

Big changes are taking place at the Wisconsin Veterans Museum, according to its Director Michael Telzrow. “We are going to be removing the bronze figures from the windows.”

Seventeen life-like figures of soldiers, sailors, aviators, Marines, and nurses represent the men and women of Wisconsin who served in America’s conflicts. The statues have been displayed in two large windows overlooking the Capitol Square in Madison for 20 years, but Telzrow says it’s time for an update.

“We’re celebrating our 20-year anniversary at this location this summer, so it’s an opportunity for us to sort of update the windows. We’ve had some issues with lighting in there; we’re gonna fix the lighting.” Telzrow says the figures look great at night, but with the glare of the sun during the day, it was difficult for passersby to see anything. 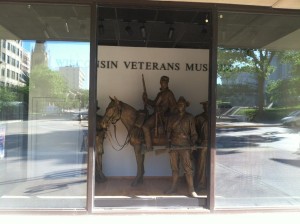 One of two windows at the Wisconsin Veterans Museum displaying bronze figures representing Wisconsin veterans. One glass section has been removed, showing the contrast from the obstructed view as a result of the reflection.

There’s also a desire to do something new with the valuable downtown space, Telzrow says, something different and engaging. The main window will be an evolving exhibit space. “The deinstallation is probably going to take at least a day or two. We’re putting new flooring in, we’re painting the walls. What follows will be,” he says, “in this case a large photographic of Vietnam subject matter and some audio component to that, as well.”

One window will be used to promote new programs and exhibits. Telzrow says many people don’t know what’s inside the museum based solely on the window displays. They hope to use more color and dynamism to lure pedestrian traffic inside the Veterans Museum, whose purpose is to commemorate, acknowledge, and affirm the role of Wisconsin veterans in America’s military past. 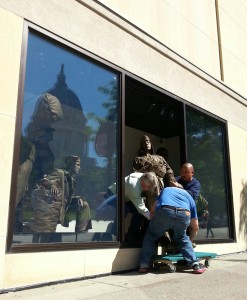 Bronze figures are removed to make way for “updated” window displays at the museum. “We’ve had some issues with lighting in there; we’re gonna fix the lighting.” (PHOTO: Jackie Johnson)

As for the future of the statues? “They’re very evocative of the sacrifice that Wisconsin veterans have given to this state. We’re proud of them and we don’t want them to go away so we’re gonna spread them around the state so others can enjoy them.”

The figures will be soon be used to enhance the veterans homes in Chippewa Falls, King and Union Grove. Telzrow says the cost of this renovation is “minimal.”

The bronze figures were designed and installed during the creation of the museum at its current location on the corner of Mifflin Street and State Street under the leadership of Governor Tommy Thompson, Veterans Affairs Secretary John Maurer, and Museum Director Richard Zeitlin.