You are here: Home / Packers / Harris has cyst removed from his lung

Green Bay Packers running back DuJuan Harris had a cyst removed from his lung.  His agent, Dave Lee said it’s something Harris has dealt with 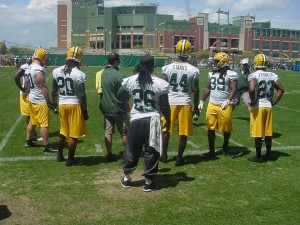 all his life without even knowing it.

The cyst was discovered during a routine physical.

Lee told the Milwaukee Journal Sentinel, “Now his lungs are open to breathe all the way again, at 100% again.  He should be able to get more oxygen in his body and have more endurance and be able to do more as a football player now.”

The cyst was not cancerous and there were no complications with surgery.  Harris should be back in two weeks.  But considering the Packers’ OTA’s wrap up on June 14, Harris will technically be out until training camp.

Harris, a street free agent who was promoted from the practice squad on Dec. 1, was the Packers’ most productive back late last season, when he averaged 4.6 yards per carry over the final month.  He was a starter in the playoffs.

Harris is one of those feel-good stories.  Prior to his arrival in Green Bay, he was working as a car salesman in Jacksonville, Florida.