You are here: Home / News / Kind says no plans to run for governor 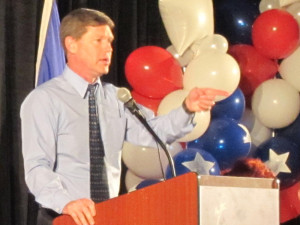 Wisconsin Congressman Ron Kind (D-WI) says he has pretty much ruled out a run for governor in 2014. The Democrat from Wisconsin’s Third Congressional District says he’s got a lot on his plate and “sees no path where Ron Kind would be a candidate for governor next year.”

While no Democratic candidate to take on Walker has emerged, Kind says the party does need to find someone who can be a “full time governor” who is focused on economic revival here. He says the state needs a governor who “cares more about Polk County, Wisconsin than Polk County, Iowa, and we’re not getting that from the current governor.”

Kind says he’s far more focused on his current job and the challenges that face him in Congress. He says the possibility of enacting comprehensive tax reform this session is something that happens only “once in a generation.”

As for a possible U.S. Senate run against Republican Ron Johnson (R-WI) in 2016, Kind is leaving his options open. He says there are a lot of factors that would go into such a decision, although he believes Johnson is “pulling up short” in his current representation of the state.

Kind’s comments followed his speech to delegates at the Democratic Party of Wisconsin’s state convention in Oconomowoc Friday night.