You are here: Home / News / Lawmaker lives on food stamps 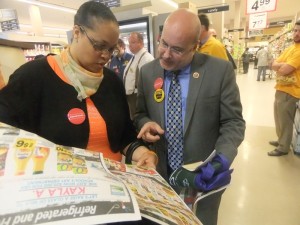 The food U.S. Representative Mark Pocan (D-Madison) consumes for one week is purchased solely with a food stamp budget. “So many things I had to put back on the shelf that I couldn’t afford. Trying to get something that’s a nutritional week of food is very difficult.”

The average nationwide weekly benefit for someone on the Supplemental Nutrition Assistant Program (SNAP) is $31.50, which breaks down to $4.50 per day and $1.50 per meal.

Pocan’s goal is to understand the challenges of 47 million Americans — including more than 800,000 Wisconsinites — who rely on the safety net that food stamps offer.

The SNAP Challenge allows Pocan to walk in the shoes of food stamp recipients and to shed some light on hunger and poverty in America.

“There’s a lot of people who qualify for food stamps who, because of the stigma, don’t apply and there are probably a whole lot of other hungry people who aren’t participating.” Pocan says there’s just a lot of hunger and poverty in America, especially in this economy. “We need to do everything to get those people working, but in the meantime, supporting them in the tough time.” 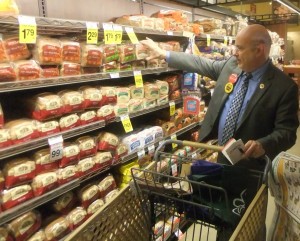 Congressional Republicans are currently pursuing $20.5 billion in cuts to SNAP, as part of the $500 billion, five-year farm bill. “The fact that we’re cutting that much money at a time that people are still struggling in this economy is really unconscionable.”

Pocan says he has to ration his food, he also spent a lot of time reading the sales papers, looking for coupons, and passing up many sought-after nutritional items. “You know, I did splurge on one two-liter — I haven’t opened it yet — a bottle of diet Mt. Dew.”

Critics say this is just a gimmick, a publicity stunt. Pocan says he does want publicity; this is a way to raise awareness about the SNAP program and the challenges many Americans face. Many Republicans argue food stamp spending is out of control and ripe with corruption.