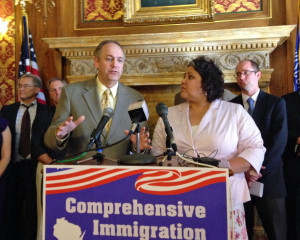 Legislators in Madison are urging members of Wisconsin’s congressional delegation to pass immigration reform. With the U.S. Senate poised to vote, 46 members of the state Senate and Assembly have signed on to a letter, urging a “yes” vote.

“We know that reform will strengthen our economy, and strengthen our country’s future, said Representative JoCasta Zamarripa (D-Milwaukee), who represents a large Latino constituency. “We can secure the borders, and in so doing, I think we’ll solve many problems that the federal government has allowed to be in existence for thirty years, but that we at the local and state level have to do deal with,” said Representative Jeff Stone (R-Greendale).

“Wisconsin agriculture is extremely dependent on immigrant labor,” said Representative Al Ott, (R-Forest Junction), who serves on the Assembly agriculture committee. “I really do think that it’s time for the federal government to get serious about immigration reform.”

“We don’t have the luxury to wait for the perfect bill,” said Representative Eric Genrich (D-Green Bay). “The families in my Assembly district who continue to be divided by our irrational and burdensome immigration framework don’t have that luxury either. The time to act is now and I think the bill to pass is this one.”

A final Senate vote could come as soon as today. Wisconsin Republican Ron Johnson has indicated he has serious concerns with the bill, and is a likely “no” vote, while Democrat Tammy Baldwin is expected to vote for it.