You are here: Home / Fires/Accidents/Disasters / Man dies in car versus train crash 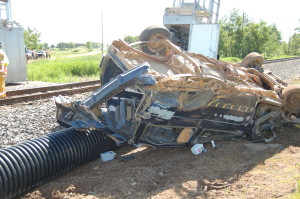 An elderly man from Spencer is dead following a crash involving a train and a Dodge Grand Caravan in central Wisconsin.

Emergency officials responded to a 911 call Tuesday morning at 9:15, according to the Clark County Sheriff’s Department. The 1994 minivan driven by 81-year-old Charles S. Podbelsek was traveling eastbound on Century Rd approaching the railroad crossing when the incident occurred, according to the initial investigation. The crash happened in the Township of Unity, about 15 miles northwest of Marshfield.

Officials say Podbelsek did not stop at the crossing, where there is a stop sign, and then slammed into a southbound Canadian National train. The Caravan was thrown south of the crossing where it landed on its roof. Podbelsek was ejected from the vehicle and pronounced dead at the scene.

The train was being operated by Jeffrey L. Graff, 56, Superior.

The investigation continues. This is the second traffic fatality for Clark County in 2013. The Spencer Fire and Ambulance and Wisconsin State Patrol assisted at the scene.