You are here: Home / News / One year later, Walker reflects on recall win 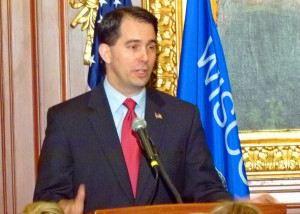 A year ago today, Scott Walker became the first governor in U.S. history to survive a recall election. Walker reflects on that campaign and his June 5, 2012 defeat of Milwaukee Mayor Tom Barrett who also challenged him in 2010.

“Sometimes it seems like it was just yesterday, other days it seems ten years ago,” says Walker. “It’s an interesting balance but it’s a lot calmer than it was a year ago at this time.

Walker has since been following in the footsteps of many former presidential candidates, speaking around the nation and recently in Iowa. That has prompted speculation about Walker having White House aspirations, but the governor says he just likes talking about the successes in Wisconsin.

“I get a kick out of it. I don’t even talk about the ‘p’ word, plenty of people in the media and plenty of other political pundits talk about that so I’ll let them do the talking on it.”

Walker has fallen short of his 2010 campaign promise to create 250,000 jobs by the end of his four-year term.  “Even though the numbers not as aggressive as we’d like initially we’ve still gained, even by the federal government’s numbers, more than 62,000 jobs in the first two years,” says Walker.

He repeats the claim that companies had been hesitant to hire during the uncertainty of the recall but says employers are confident now that the state is on the right path.

Wisconsin Republicans are holding a rally in Pewaukee tonight to mark the anniversary of Walker’s recall victory.