You are here: Home / News / Secretary of state hopes to restore the office 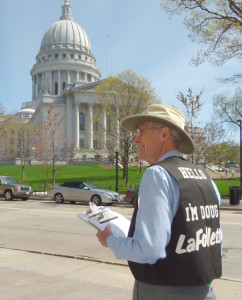 The secretary of state wants the governor and the legislature to put politics aside for the good of the state, its economy, and job creation.

Secretary of State Doug La Follette is working on developing a good structure for his office to encourage people to form corporations, do business, and borrow money in Wisconsin.

In 1995 many responsibilities were transferred to a newly-created Department of Financial Institutions (DFI). La Follette says over the years people inquiring about trademarks, notaries public, and other business regulations were confused. He says it’s important to restore those business functions to the office of Secretary of State.

“This is not about Doug La Follette. I’m not gonna be around forever. It’s about what’s best for Wisconsin’s economy and for doing business. If we wanna be open for business we shouldn’t make it hard for people to find the things they need to do business.”

Rohn W. Bishop is critical of the position. The Republican last month announced his candidacy for La Follette’s “pretty cushy gig.” Bishop says he can carry out the limited duties of the Secretary of State while advocating for elimination of the office.

La Follette defends the office. He met with Governor Scott Walker recently, he says, to explain how Wisconsin has gone “off the track” by creating the DFI and putting it in charge of the business functions.

“All across the country we want to encourage people to come here — form corporations, do businesses, borrow money. All that requires dealing with the Secretary of State’s office everywhere in the country except Wisconsin. That doesn’t make sense.”

La Follette was first elected to the office of Secretary of State in 1974. He announced at the State Democratic Party of Wisconsin Convention over the weekend that he will seek re-election next year.

Bishop says “It’s a waste of taxpayer money to keep a position around just so Mr. La Follotte can set some kind of record for duration in office.”

The election is 17 months away.