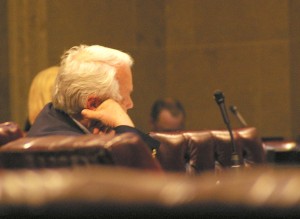 The Wisconsin legislature has completed work on the state budget, which is now ready for Governor Scott Walker to consider. After virtually no debate on the state budget by the Assembly on Wednesday, the state Senate went all day on Thursday, from 10:00 in the morning to 10:00 at night. The debate was marked by numerous amendments from minority Democrats, marred by protesters who burst into the chamber, and ended with a procedural objection by Senator Tim Carpenter (D-Milwaukee) that pushed the final vote to just after midnight.

Leadership agreed to limit the debate to 12 hours, although that meant that not every amendment authored by Democrats ended up being debated. “I think we’ve had definately a good exchange,” said Majority Leader Scott Fitzgerald (R-Juneau). “I don’t think the minority part can say that the majority party did not debate today.

Still, when it came time for a final vote shortly after 10:00 p.m., Carpenter raised the procedural objection that forced the chamber to adjourn until the next day – 12:01 a.m.

“Senate Democrats fought for our neighbors and for neighbors across the state,” said Minority Leader Chris Larson (D-Milwaukee) in his closing remarks. “We didn’t hear the defense of this budget and the direction it’s taking our state. Instead, we saw a lot of looking backwards and pointing fingers.”

The final vote was 17-15, with Senator Dale Schultz (R-Richland Center) joining Democrats in opposing the budget.