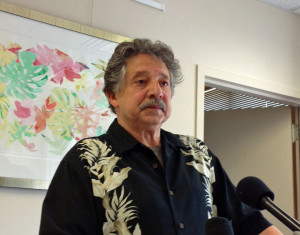 Madison mayor Paul Soglin has weighed in, on the latest allegations surrounding a fatal police shooting. Soglin, at a Tuesday press conference announcing new training for all city departments, addressed comments made by Officer Stephen Heimsness via his squad car computer, in the weeks preceding his fatal shooting of Paul Heenan last November.

The mayor called the comments, reportedly strewn with obscenities and racist or sexist remarks, were troubling and disturbing. “What concerns me is that, if other officers were the recipient of it, it might in some cases indicate that such communications were acceptable,” said Soglin.

Soglin believes the “overwhelming majority” of MPD officers do not participate in such commentary, but he wants to ensure that it’s not part of the department’s culture. “When things go wrong in an organization, it’s usually culture,” the mayor said. “To not face up and confront that, to remain silent, is the worst thing we can do.”

Police Chief Noble Wray has called for Heimsness to be fired, for repeated violations of department policy, including the comments. Soglin said his feelings regarding Heimsness’ actions prior to the shooting are “not the legal standard,” but that the situation facing the department is “the most serious in four decades.”