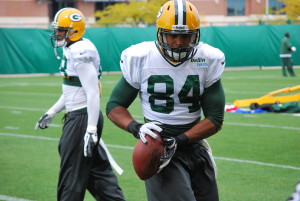 The Packers decided to pick up Jermichael Finley’s $3-million roster bonus for 2013.  They also signed fifth-year veteran Matthew Mulligan and brought in Ohio State’s Jake Stoneburner.  Added into the mix is Andrew Quarless who returned to off-season workouts after missing last season while rehabbing the torn ACL and MCL injury that brought an end to his 2011 season.

Williams saw some tough luck last season when he was going to be a big part of the week 6 game plan against Houston.  Jermichael Finley was nursing a sore shoulder and Williams was going to get his chance, until a hamstring injury ended that opportunity.

Williams did earn praise for his work on special teams and as the teams backup fullback last season.  But he knows it’s time to put up or shut up.  There’s no offseason cow-tipping.  Williams said its all about getting himself ready at a high level and then be consistent with that play all season.

A big year for Williams could go a long way in determining whether or not the Packers need to try to keep Jermichael Finley around even longer.

The Packers open training camp July 25th with the first official practice scheduled for the morning of July 26th.