You are here: Home / News / Arrests made in Capitol rotunda 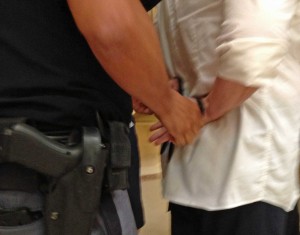 Acting on a recent ruling that the state’s permit process is constitutional, Capitol Police made arrests inside the rotunda on Wednesday. Capitol police informed participants in a daily sing-along that they were in violation of the permit requirement and would be arrested.

Onlookers included the media, and state Representative Melissa Sargent (D-Madison). “These folks are peaceful, and are exhibiting their constitutional rights to speech, and petitioning their government,” said Sargent. “I’m deeply concerned about what is occurring.”

Bill Dunn of Middleton was among those issued a $200.50 ticket for assembling without a proper permit. “I kind of expected it,” said Dunn. “I’ll plead not guilty, because it’s a public forum where people have the right to gather and partition their government.”

State Senator Bob Jauch (D-Poplar) also was in the rotunda. “Is this really the message that we want to send to the rest of the world, that this is Wisconsin, a place where people can’t come to express themselves in their state Capitol? That’s baloney,” said Jauch. “If everyone started singing right now, what would they do, arrest everyone who happens to be here?”

Stephanie Marquis, Communications Director for the Office of Secretary of the Department of Administration Mike Huebsch, said a total of 25 no permit citations were issued to 22 people (3 individuals received two citations).  In addition, one individual received a disorderly conduct citation for spitting on a singer/protestor, for a total of 26 citations in all.

In a statement, Marquis said “Judge Conley ruled several weeks ago that the State’s permit process is constitutional. The Capitol Police are upholding the law to ensure the building can be shared by all citizens who come to the Capitol.”