You are here: Home / Packers / Day 3 of Training Camp brings the pads 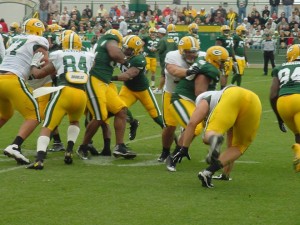 but he didn’t like the lack of discipline his players showed.

The morning workout features three different skirmishes, something that the coach said is common the first time the pads go on.

McCarthy chewed out rookie linebacker Sam Barrington for a crushing hit on a receiver during a period called “Pursuit & leverage.”  McCarthy yelled to “Just line up and tag the guy!”

There was screaming back and forth from the offense and the defense.  RG Josh Sitton could be heard telling defensive backs coach Joe Whitt to lay off with his squad taunting players and taking cheap shots.

AUDIO: Josh Sitton on the scuffles at practice :24

Mike McCarthy said it’s part of the teaching process.  He said practicing with an edge is good, but to a point.

Packers veteran defensive back Tramon Williams sat out the second half of practice with a knee that flared up.

The Packers are off on Monday.  They’ll practice next on Tuesday morning at 8:20am.