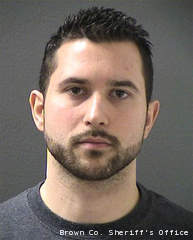 A man who escaped Tuesday from the Mendota Mental Health Institute in Madison remained at large Wednesday evening, and law enforcement in Green Bay were warning residents that he has ties to the community.

According to the Brown County Sheriff’s Department, 30 year-old Graham L. Stowe should be considered “extremely dangerous.” Stowe is described as being approximately 5’8″, 165 pounds, with brown hair, brown eyes and a goatee. He was last seen wearing a white t-shirt and blue jean shorts.

Stowe is serving a 39 year sentence in a Brown County case, where he was found not guilty by reason of mental disease or defect on charges including false imprisonment, first-degree reckless endangerment and intimidation of a victim. Sheriff’s Captain Jeff Sanborn said back in 2003, Stowe held family members captive and threatened to burn down the house they were in.

Sanborn said  Stowe is very likely to  return to the area because he spent the majority of his life in Green Bay and has friends and family in the city.