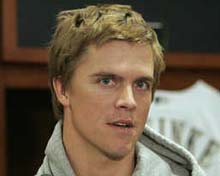 But when Greinke finally talked to the Los Angeles Times, he pulled no punches.

“The main this is, yeah, he lied to us,” Greinke said.  “He forced us to lie for him, threw people under the bus in order to help himself out and didn’t care, blamed others for his mistakes and it’s just a lot of things you don’t expect from people.”

“Everything was so convincing.  He had people to blame.  He seemed like a really good guy.  He as a good teammate at the time.  You don’t know the guys that he was pinning it on.  I’m not positive, but I think everyone 100% believed him at the time.

Greinke is also waiting for Braun to issue an apology.  Braun’s only sign of an apology so far has been in the statement released by Major League Baseball announcing the suspension.