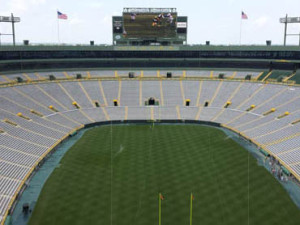 The new seats in the south end zone at Lambeau Field are officially open.

Green Bay Packers team President Mark Murphy says the 7,000 seat, $146 million expansion includes some things not available in the rest of the stadium, such as a wide variety of seating options, viewing platforms, and other amenities. Murphy says the team has been working on the addition for years, and he’s excited to start seeing fans in the stands.

The new seats are expected to bring some major economic benefits to Green Bay. Having 7,000 more fans in the stadium every game, over the course of ten games for the season, is like having an extra home game for the year. Murphy anticipates that will mean an extra $12 million for the local economy.

The extra seats also mean about 3,800 people were able to come off the waiting list for season tickets. Many of those fans had been waiting an average of 30 years to score one of the hottest tickets in professional sports.