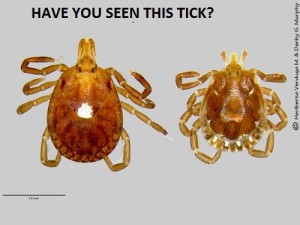 There’s a new, potentially troublesome tick to track in Wisconsin. It’s not a deer tick or a wood tick, and this lone star tick has nothing to do with Texas. “Lone star actually reflects the little white spot on the back of the adult female,” said University of Wisconsin-Madison entomology professor Susan Paskewitz.

This new tick from the south has been confirmed in at least a haf-dozen Wisconsin counties. Paskewitz pulled one off of her own daughter, and found one herself in Price County, which she said is surprisingly far north.

And like the deer tick with Lyme disease, the lone star tick can carry a potentially debilitating and dangerous disease. Lone star tick bites can transmit bacteria that cause human monocytic ehrlichiosis, characterized by fever, muscle aches and fatigue. “There is also a more rare reaction to Amblyomma in which a bite makes some people develop an allergy to red meat,” Paskewitz said.

She’s hoping to collect specimens; if you find one you can contact her through the UW entomology department.