You are here: Home / Education / Many schools expected to get less state aid 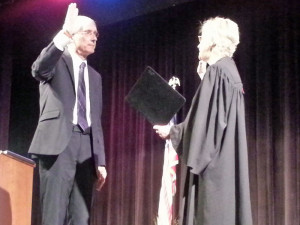 State Superintendent Tony Evers being sworn in to a second term in office. (Photo: Andrew Beckett)

Despite an increase in school funding in the new state budget, many districts in Wisconsin are projected to receive less money in the upcoming school year.

State Superintendent of Public Instruction Tony Evers says the drop in actual aid going to schools is not surprising. Despite the increase in the state budget, he says the hike was “less than the cost of inflation” and barely makes up for the $550 per student that was cut two years ago.

The state budget signed by Governor Scott Walker on Sunday includes a $150 per year increase in per student spending. Evers admits the extra funding is better than zero, although he also argues that’s like saying “still breathing is better than dying.”

Evers says the cuts leave schools in a difficult position and the lack of attention could put efforts to transform and improve public schools in a “more tenuous place.”

The figures released Monday are only estimates. DPI will certify state general aid amounts for 2013-14 in mid-October.

Superintendent Evers was also sworn in Monday to the start of a second four year term in office, which he won earlier this year in a race against Republican state Representative Don Pridemore. During his inaugural address at a Madison high school, Evers touted the needed to stop trying to declare public educators as enemies and replacing public education with private schools. He said more attention needs to be given to making sure public schools have the funding they need and that every child can graduate from high school and be prepared for the next step, whether it’s a career, college, or the military.