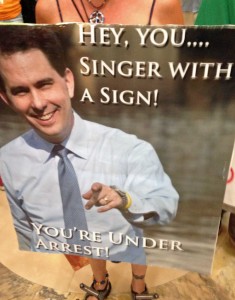 A bigger crowd for day two of rotunda arrests. With a recent court ruling but still no permit by the ‘solidarity singers,’ Capitol police made more arrests on Thursday. State Senator Tim Cullen (D-Janesville) was there. “Freedom just won,” said Cullen. “This is still America, and this is still a people’s Capitol. It’s not DOA or Governor Walker’s Capitol.”

“When they arrested 25 (on Wednesday), they simply encouraged more people to come, and so you end up with a crowd that’s four or five times larger,” said Senator Bob Jauch (D-Poplar).

A Department of Administration spokeswoman said there were 26 citations issued for no permit. Linda Hedenblad of Madison received one. “I came with no intent at all except to see what happens, and when I saw them carrying away people who were doing absolutely nothing wrong, and when they approached me, I thought ‘I guess it’s my turn too,'” said Hedenblad.

There were also three state charges for disorderly conduct, resisting arrest, or both. The statement from DOA said the arrests would not be necessary if the singers would apply for a permit:

“The Capitol Police are sworn officers who will continue to uphold the law, which has also been upheld by a federal judge. If the noontime singers would get a permit, then they could continue their activities without any arrests or citations. They are the only group being cited as they are the only group who has not applied for a permit for their regularly scheduled events at the Capitol rotunda. The question to ask is why they refuse to apply for a permit.”

But an attorney who’s represented some protesters said there is no formal organization overseeing the noon hour sing-alongs. “They really are not a group in the usual sense of the word,” said Bob Jambois. “It’s just a kind of amorphous, amalgam of people who happen to coalesce around the lunch hour and sing protest songs. Sometimes there’s ten people here, and sometimes there’s 110.”

U.S. District Judge William Conley struck down portions of the state’s policy requiring permits for use of the Capitol, but did change the threshold of when a permit is required, from four to 20 people.

Thursday’s arrests took place in front of the media, and numerous onlookers, including Zeb Page is a former Wisconsin resident visiting Madison with his wife and three young children. “They really want to make them (the singers) go away, and I think they really underestimate just how important the work is that’s being done here,” said Page, who’s followed events at the Capitol from his home in Ohio. “So when we were in town for a family reunion, we thought it was really important to bring our kids here, to see what it is to be an American.”