You are here: Home / Legislature / Putting Citizens United to a statewide vote 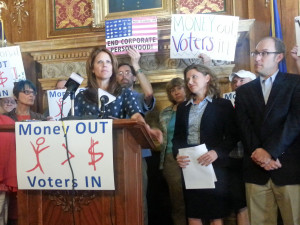 A broad coalition of grassroots organizations want Wisconsin voters to weigh in on the Supreme Court’s controversial Citizens United decision.

The 2010 ruling greatly expanded the ability of corporations to donate to political campaigns, which Lisa Subek of United Wisconsin says has resulted in campaign spending more than tripling in the past two years. Subek says candidate and interest group spending for state and federal offices totaled $391.9 million in the 2010 and 2012 election cycles, more than triple what it was before the high court’s ruling. Even without the money spent on the state’s historic wave of recall elections, she says spending still doubled during that time frame.

State Representative Chris Taylor (D-Madison) plans to introduce a bill that would call for a statewide advisory referendum question asking voters if they support allowing corporations to spend unlimited amounts of money on political campaigns. Taylor says the people should have a chance to speak on the issue.

Taylor admits getting her bill through the Republican-controlled Legislature could be difficult, although she says opponents of Citizens United will be going door to door in Wisconsin to make sure “it’s impossible for Legislators to ignore this.”

Similar referenda questions have been approved in 16 other states. Over a dozen Wisconsin communities have also approved or scheduled votes on their own versions of the measure.