You are here: Home / Education / Reilly resigns from UW system 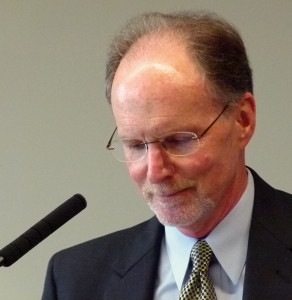 University of Wisconsin System President is leaving his job at the UW.

Kevin Reilly has announced his resignation after serving as president of the 26-campus system for the past nine years. In a press conference Tuesday afternoon, Reilly told reporters he’s served longer than many of his counterparts around the country.

The 63-year-old leader also served four years before that as the chancellor of UW Extension. “So that’s a total of 13 years in these 24/7 intensely public positions. We even let the president of the United States off after eight years, don’t we? So I think it’s time.”

Reilly will advise the American Council on Education starting in January, and return to teaching. Nobody asked him to step aside from his current gig, he says, and the tumult in the legislature did not accelerate his decision to leave. Reilly says he began talking to UW Board of Regent leaders last fall about a transition.

“In a nine-year span of leadership, you have periods that are tumultuous and you have some that are calm. I think experienced leaders expect that roller coaster ride along the way.” Reilly says he’ll be 64 real soon, “I’m not ready to retire but I’d like to do some other things before I’m ready to retire.”

Governor Scott Walker and state lawmakers had recently criticized the UW system after an audit revealed a $648 million budget surplus at time student tuition was being increased. Reilly was also in the hot seat when it was discovered that a payroll computer glitch overpaid employees $33 million in various benefits.