You are here: Home / Packers / Retiring #4 won’t happen this year

The Green Bay Packers will definitely retire Brett Favre’s No. 4, but it won’t be this 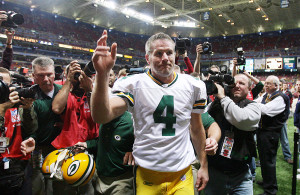 Packers President and CEO Mark Murphy made it clear that reconciling with the QB is important to the franchise.

Murphy said it’s possible Favre could still make an appearance at Lambeau Field this season, perhaps as an honorary captain or as part of the alumni weekend festivities.