You are here: Home / Packers / Rodgers disappointed in Braun after suspension (AUDIO) 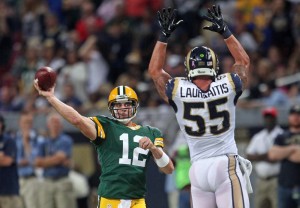 field instead of on it.

Rodgers stood behind Braun and was critical of those who didn’t believe Braun when he denied taking PED’s.  Then came the 65-game suspension by Major League Baseball with Braun admitting guilt.

Rodgers said he has talked to Braun since the Brewers outfielder was suspended.  He was then asked how this incident affects their relationship moving forward.   Rodgers said that is yet to be determined.

AUDIO: Aaron Rodgers disappointed in being lied to :20

AUDIO: Aaron Rodgers said the status of his relationship with friend Ryan Braun is yet to be determined :25

Both Rodgers and Braun have allowed their names to be used in the naming of Brookfield restaurant “8-Twelve”.  A second restaurant is set to be opened in the ball in the Bayshore Town Center called, “8-Twelve MVP Bar and Grill”.

Rodgers was also asked about the recent comments made by former Packers wide receiver Greg Jennings.  Jennings said that Rodgers was rarely criticized and needed to take more of the blame when it was warranted.

“You know what, to me, I’m concerned about the opinions of the guys in this locker room and the guys we have here,” he said.  “We have 90 guys right now and it’s exciting to be one of the leaders of this team and I’m very confident in my style.  I think the guys respond well to it.”