You are here: Home / Crime / Courts / State will not appeal Capitol access ruling 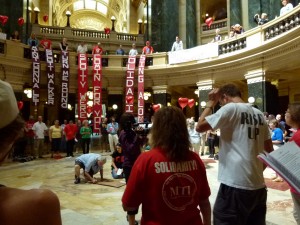 The state Department of Administration says it will abide by a federal judge’s order, which found portions of a permitting policy for demonstrations at the Wisconsin state Capitol building were unconstitutional.

In the temporary injunction issued earlier this week, U.S. District Judge William Conley overturned a state policy that requires groups of four or more people demonstrating at the Capitol to obtain a permit. However, the judge also said permits could still be required for groups of more than 20 people, noting that the state does have an interest in trying to control some access to the building and its grounds.

In a statement released Wednesday, DOA Secretary Mike Huebsch said “We thank U.S. District Judge William Conley for his thorough review of this case and his decision that recognizes the permitting process for our state capitol is constitutional. While the judge did change the threshold of when a permit is required from four to 20 people, the Department of Administration will not appeal the court’s decision. The permit process remains in full effect for the capitol rotunda and grounds, and we will comply and enforce the court order.”

The state has had policies in place for Capitol access since 1979, but those rules were strengthened and more heavily enforced in recent years following massive protests at the building that started in 2011. Capitol Police arrested several protesters last fall, after many refused to obtain a permit from the state.