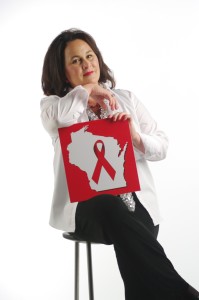 Wisconsin Department of Tourism Secretary Stephanie Klett is selected to be the honorary chair for AIDS Walk Wisconsin, the largest AIDS fundraiser in the state. “It raises about $300,000 and about 3,000 people walk and I’m proud to say I get the honor of being this year’s honorary chairman.”

Klett is no stranger to the cause. “I’ve been involved in HIV and AIDS education and fundraising for 25 years.”

When she was Miss Wisconsin in 1992, Klett implemented a program called “Attitude on AIDS” and spoke to tens of thousands of teenagers on the subject. Right now 6,364 people are presumed living with HIV/AIDS in Wisconsin, and all 72 counties are affected. Anyone can contract HIV, regardless of age, race, sexual orientation or socioeconomic status. Your risk is dependent on your activities. (See more facts about AIDS)

Klett’s “Spotlight on Wisconsin” fundraising benefit has raised more than $125,000 for AIDS/HIV charities in Wisconsin. She also raised money by hosting cocktail parties. “I realize it’s one thing to talk about a cause but another thing entirely to raise money for it.”

Progress has been made in the fight against AIDS during Klett’s two and a half decades advocating for the cause, including increased life expectancy and diminished stigma. Still, a lot of work remains.

AUDIO: Klett explains that a lot of progress has occurred since she became an activist for AIDS/HIV :42

“It’s just a really big honor and it’s something that has been in my heart and in my soul for many years so, I’m extremely thrilled about it.”