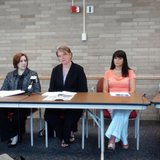 A new state law, mandating that doctors have operating and admitting privileges at a hospital within 30 miles of the clinic where they are providing abortions, and requiring women seeking an abortion to undergo an ultrasound and have it explained to them, was the subject of a forum Wednesday in Wausau. State Representative Mandy Wright (D-Wausau) and a group of health care providers spoke against the law, which is currently subject to a temporary restraining order.

Dr. Bart Hobson with Marshfield Clinic said neither requirements serves any medical purpose for women seeking abortions. “Patients who get abortions in Appleton and Green Bay come from as far away as Wausau and Stevens Point. We will see those patients here in Wausau. The only reason I can see for putting this in the law is making it harder for clinics to hire people.” He said that forcing a delay in a procedure by requiring an ultrasound just complicates an already hard choice that women are going through. “The ultrasound is there to make the women less likely to have that abortion. Having an ultrasound is not going to change the dynamics of the decision they’re going to make.”

Lon Newman, director of Family Planning Health Services in Wausau says it’s a matter of government intrusion. “These are real women and their families faced with private intimate decisions related to the reproductive health and rights. The rights to protection from unreasonable government intrusion and interference is well understood in terms of our homes our property our rights to speech and our religion.” He said that contraception can fail and that women who can’t support a child should be able to have these decisions with their doctor without having extra medical procedures forced onto them.

Laura Scudiere from Bridge Community Clinic in Wausau said the speed at which this bill has passed has made it impossible for clinics and hospitals to be able to be ready for providing free ultrasounds for patients, or for women who are already scheduled for abortions to have them. “And so when we look at the underserved, this bill tries to limit access. There’s no such thing as free services.”

Jane Graham Jennings, director of the Women’s Community, said the bill really puts a difficult additional emotional and personal burden on women who are coming from a situation of rape or incest. “This law strips them of their autonomy which is what the sexual assault has done itself. The only thing we have control over our body. We’ve now lost that control with this bill.”

Wright, who was previously a teacher in Wausau, said she’s seen the effects that assaults have on already emotionally fragile children. “It is truly tragic to think about children in my classes to have the kind of support they’d need to navigate all these new rules.” She’s also concerned over the speed with which the bill was pushed through the Legislature and says that people were not given the time to explore the bill before it was signed by Governor Walker last week.

The bill is currently on hold with a temporary restraining order put in place by Federal Judge William Conley. That order will remain in place until a full hearing on the law can be made next week.