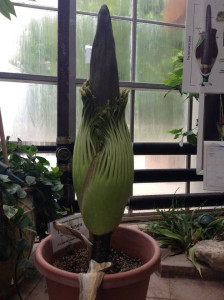 It’s been dubbed “the corpse flower,” and the Titan Arum plant at the University of Wisconsin is set to bloom this week. The mature flower of the tropical plant is known for the unsavory smell it gives off, a scent akin to rotting meat that’s designed to attract the carrion beetles and flesh flies that typically pollinate it.

The D.C. Smith Greenhouse’s plant started giving off a mild foul odor on Monday morning, and greenhouse manager Johanna Oosterwyk predicts the bloom will likely start Tuesday or Wednesday. Once it does, the flower will last between 24 and 48 hours before collapsing. Updates will be posted to the greenhouse Facebook page. The greenhouse will be open until 9 p.m. each evening while the plant is in bloom.

This will be the D.C. Smith Greenhouse plant’s second bloom. It grew from a seed collected from the UW Botany Greenhouse’s “Big Bucky” plant in 2001 and bloomed for the first time in September 2010. After that it went dormant, then put up a single leaf for about 18 months, and then went dormant again until this past spring. The current bloom started to emerge in June as a small bud.