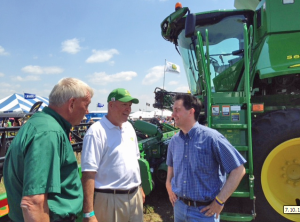 Senate Republican Glenn Grothman has introduced legislation making it legal for Wisconsin farmers to sell unpasteurized milk and other raw dairy products directly to consumers, but Governor Scott Walker isn’t certain whether he’d approve the measure if it made it to his desk.

“There’d have to be some pretty strong safeguards to ensure that whatever legislation would come through would make sure that … we talk about being America’s Dairlyland, we want to make sure we preserve that, as well.”

The governor talked to reporters in northwestern Wisconsin Wednesday at Farm Technology Days, whose focus this year is dairy. Walker recalled his friends of his youth drinking unpasteurized milk on their family farms. He understands the interest in drinking the raw beverage.

“By the same token we are America’s Dairyland and I think it’s incredibly important that we preserve a safe supply of milk and dairy products in the state. So, any step that would ever go forward would have to be one where we could absolutely guarantee that we would have safe milk, not only for the people of the state of Wisconsin, but obviously — as one of our trademarks — all across the country.”

The Wisconsin Safe Milk Coalition is among the opponents of the proposal. The group cites health risks of drinking raw milk and the potential to tarnish the dairy industry.

Walker said it’s way too early to comment on whether he’d approve or veto a raw milk bill. The measure is still in draft form and hasn’t even been heard in committee. It’s author is seeking cosponsors for the legislation.