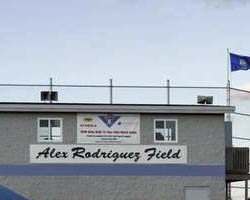 The Fox Cities Sports authority is dropping the name of Alex Rodriguez Field, effective immediately.  The youth baseball field at the USA Youth Sports Complex in Appleton was named after Rodriguez in 2003.

Rodriguez was one of 13 players suspended on Monday by Major League Baseball for their alleged involvement with Biogenesis of America, which is accused of distributing banned performance enhancing drugs.

Rodriguez was suspended through next season but said he planned to appeal and play while that process takes its course.

Stanley Baehman is the Director Emeritus for the Fox Cities Sports Authority.  He said once the suspensions came down, it was an easy choice.

AUDIO: Baehman said this was a no-brainer :17

The Fox Cities Sports Authority will pay to remove the plagues that reference Rodriguez’s name.