You are here: Home / Crime / Courts / Brother of protester accused of injuring cop speaks out 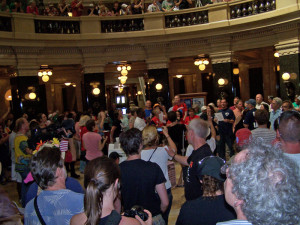 Protesters returned to the Wisconsin state Capitol Tuesday in greater numbers, a day after police arrested two brothers during the daily “Solidarity Singalong.” Attendance appeared to almost triple, after video of the arrest spread across social media.

Police arrested 22-year-old Damon Terrell Monday during the protest. The Department of Administration says the arrest came after Terrell turned away from officers while being informed he was participating in an unlawful event. In the videos, multiple officers can be seen holding Terrell on the floor while handcuffing him, and then carrying him out of the rotunda.

Terrell is facing a felony battery charge after the Department of Administration says an officer was injured during the arrest, although his older brother, Christopher ‘C.J.’ Terrell, says videos of the incident show police were the aggressors. Terrell says “there’s no angle that exists that shows my brother assaulting a police officer.”

C.J. Terrell was also cited Monday for resisting officers and both brothers have an extensive history of charges connected to the protests, although most have been dismissed by Dane County prosecutors.

Tuesday’s protest resulted in only a handful of arrests early on during the noon hour. Police largely kept their distance after the initial arrests, walking regular patrols around the rotunda and removing some signs that had been left unattended in the area.

Nearly 300 citations have been issued during the Solidarity Singalong since July 24th.