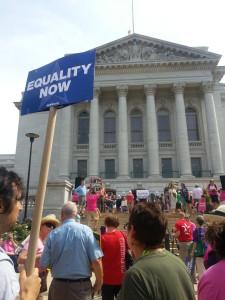 Wisconsin became the first state in the nation to ratify the 19th amendment to the U.S. Constitution back in 1919, guaranteeing women the right to vote.

Former state attorney general Peg Lautenschlager says it’s important to remind state officials that Wisconsin should continue to be a leader on women’s issues such as equal pay for equal work. “Tragically what we’ve seen in Wisconsin, however, is a cutting back of women’s rights — both in terms of their economic power, their opportunities to seek health care, and other things.”

Lautenschlager says Wisconsin lawmakers should not be tearing down the gains that have been made over the past several decades. She says, in general, the trend has been on the side of making progress. “Oh there has been some progress, I think that’s fair to say. I mean, I look at myself as somebody who’s been in a court room fairly often and a litigator. When I first started practicing law in the 1980s women lawyers were a rarity and women lawyers going into a court room were even more rare.”

Despite the excessive heat on Monday, scores of people convened on the Capitol steps to commemorate Women’s Equality Day and to rally for women’s issues.

Planned Parenthood says “Women’s issues are Wisconsin’s Issues and when women succeed, Wisconsin Succeeds.” Nicole Safar with the group says, “The voters in Wisconsin, especially the women voters, are sick of being treated as second class citizens.”

American women were granted the right to vote on August 26, 1920, when the 19th Amendment to the United States Constitution was certified. Planned Parenthood Wisconsin says they continue to mark the anniversary because it’s important to remember that freedom and opportunity for women have been gained only through effort, struggle, debate, disappointment and perseverance.