You are here: Home / Packers / Cobb is battling through biceps injury

Randall Cobb’s right biceps injury continues to bother him, and it may for some 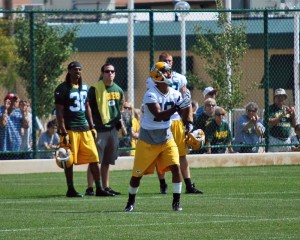 Cobb labored through the end of practice on Tuesday.  He and the Green Bay Packers will have to decide if Cobb should cut back on the number of times he practices during the week.

Cobb injured his biceps at the Family Night scrimmage more than a week ago and didn’t return to practice until this week.  Head coach Mike McCarthy said it’s something Cobb will likely have to battle with for awhile, but there’s no risk of further injury.

For Cobb, it’s a tough call.  He wants to be on the field, but resting would help him heal quicker.

Cobb admitted that it probably wasn’t smart to practice yesterday.

Cobb may need extended time off.  There’s a decent chance that he’ll sit out Saturday night’s game against the Rams in St. Louis.

Cobb does have a history of toughness.  When he was in high school, he suffered a hamstring injury but suited up anyway to serve as the holder on field goals and extra points.