You are here: Home / Packers / Crosby needs to turn it around, quickly! 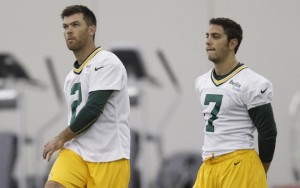 He went through the worst season of his career, hitting on just shy of 64% of his field goal attempts.

Crosby also entered 2013 training camp with some competition, street free agent Giorgio Tavecchio.  Prior to Saturday night’s team scrimmage, the two were even.  Then came Saturday night’s debacle where Crosby hit just 3 of his 8 field goals, good for 63%.  Tavecchio moved into the kicking lead, hitting 6 of 7 for just over 84%.

Crosby is entering his seventh season in the NFL.  He was asked after the game if he was concerned about his job status, Crosby said: “No, I’ve been hitting the ball well.  Obviously extremely disappointed with how I hit it tonight.  Have to evaluate that and break it down.  I can’t think about things like that.  I just have to go and actually work on things, make sure I hit the ball through the uprights.  That’s all I can really worry about and focus on right now.”

AUDIO: Tavecchio on the possibility of winning the kicking job :11

Tavecchio’s kickoffs have improved in terms of distance and hangtime.  But there’s still the possibility that the Packers could use punter Tim Masthay on kickoffs and allow Tavecchio to handle only field goals and extra points.  That is just a scenario for the Packers’ coaching staff if they eventually make a kicking change.

Crosby said there has been no carry-over into training camp from his struggles of last season.  “I’m way past that,” Crosby said.  But based on Saturday night’s performance, there’s still something that is messing up Crosby and he doesn’t have a lot of time to figure it out.

Both kickers will continue to have kicking competitions every other day throughout training camp.  Coach Mike McCarthy hasn’t revealed how he plans to kick the two kickers in preseason games, which start this Friday night against Arizona Cardinals at Lambeau Field.