You are here: Home / Badgers / Gasser cleared to play on UW’s Canada Tour 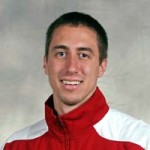 Gasser, who suffered LCL, ACL and Meniscus injuries, began practicing about two weeks ago and is considered to be ahead of schedule.

Wisconsin coach Bo Ryan announced Sunday that Gasser has been cleared to play during the Badgers 5-game, 8-day exhibition trip to Canada which begins on Wednesday in Ottawa.

Gasser was set to be Wisconsin’s point guard last season until he suffered the injury.  His duties will likely change this time around with incumbents Traevon Jackson and George Marshall having a year of experience under their belts.

Gasser is expected to play about 8 to 12 minutes a game on the trip.

AUDIO: Gasser said his skills suffered while away :18

Wisconsin faces Carleton College on Wednesday.  Two games on the trip will be streamed live and available for free at uwbadgers.com…That’s Thursday at 6:00pm when the Badgers face the University of Ottawa and again Sunday at 7:00pm against Ryerson University, which advanced to the Canadian National Championship game in 2012.